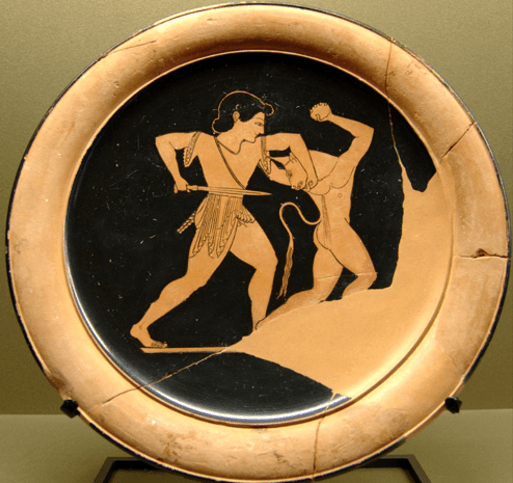 Of all the monstrous mythical creatures in Greek mythology, the Minotaur is one of the most well-known. The beast, which lived within a labyrinth on Crete, met its downfall when it came up against a powerful Greek hero. But which hero killed Minotaur? Read on to learn all about it.

What are the Kobaloi in Greek mythology?

What is a Satyr?

What is the Minotaur?

The Minotaur is a legendary mythical creature from ancient Greek mythology that lived on the island of Crete. The Minotaur is half bull and half human, with the body of a man and the head and tail of a bull.

Legend states that the Minotaur lived at the centre of the Labyrinth, an intricate and complex maze that was designed by the legendary artificer Daedalus and commissioned by King Minos of Crete.

The Minotaur is the son of Pasiphae and the Cretan Bull. Pasiphae herself was the goddess of witchcraft, and used her skills to poison the ejaculate of her husband, King Minos of Crete, in order to punish those who lay with him.

In his rage, Poseidon made King Minos’ wife, Pasiphae, fall in love with the bull, and soon after they mated. It is from this union that the Minotaur was spawned.

Pasiphae loved the Minotaur intently, and named him Asterion. Yet, King Minos despised the creature and asked Daedalus to construct the Labyrinth in order to conceal the Minotaur and stop the beast from doing any more damage.

Who killed the Minotaur?

The Athenian hero, Theseus, killed the Minoutar. Theseus was a much revered hero in ancient Greece, and is strongly associated with the founding myth of the great city of Athens. Indeed, many believed him to be the son of the King Aegeus of Athens. Others say he was the son of Poseidon.

Raised by his mother, Aethra, Theseus lived an honest life in his early years, and his divine blood was unbeknownst to him. Once he learned that he was related to such royalty, he journeyed to Athens to claim the kingdom as his own.

Along the way, he encountered several beasts and endured a number of encounters at the entrances to the Underworld known as the Six Labours of Theseus. These Six Labours saw Theseus defeat Periphetes, Sinis, the Crommyon Sow, Sciron, Cercyon, and Procrustes.

Theseus and the Minotaur – A Summary

For a number of years, seven young men and seven maidens from Athens were sacrificed to the Minotaur on Crete after King Aegeus and King Minos came to an agreement following the death of a Minoan prince in Athens who King Minos wanted repentance for.

This lasted for a long time, until Theseus – fresh from his Six Labours – requested to be included in the number to be sacrificed. He believed he could overcome the Minotaur in the Labyrinth and rid Athens of the terrible sacrificial burden.

When Theseus arrived on the island of Crete, the daughter of King Minos, Ariadne, fell in love with the Athenian hero and agreed to help him defeat the Minotaur. To do this, she gave Theseus a ball of thread that helped him navigate the Labyrinth and enabled him to know exactly where he had been within the maze.

Theseus ventured into the Labyrinth and defeated the Minotaur after a long and arduous battle that ended with him stabbing the beast with his father’s sword. Theseus used the thread to return to the entrance of the Labyrinth, and sailed back towards Athens.

There was not a happy ending, though. When sailing back from Crete, Theseus forgot to change the black sails of his ship to white, which was requested from his father to display that he was returning victorious. Upon seeing the black flags, King Aegeus believed his son to be dead, and threw himself off the cliff from which he watched the ship return.

Did you already know which hero killed the Minotaur? What’s your favourite Greek myth? Let us know in the comment section below!

If you want to watch a video summary of Theseus and the Minotaur, check out the great YouTube video below by Mythology Factory.