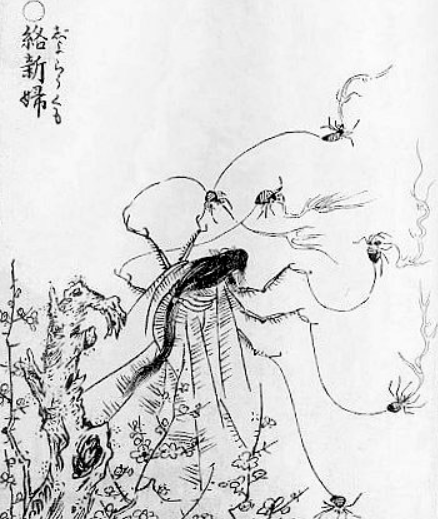 Of the many Yōkai in Japanese mythology, Jorōgumo is one of the most famous of them all. This mythical creature is typically depicted as a large spider monster that can shapeshift into the form of an enchanting woman.

But what exactly is Jorōgumo? Read on to find out all about it.

Jorōgumo is a deadly spider-woman who has the ability to both enchant and bring great misery upon those who it deals with. It is one of a large number of yōkai, which are supernatural spirit entities that can be both benevolent and malevolent in nature.

Its myth begins by a waterfall near Izu city, where one day a working man took a nap by the water feature after a long day of labour. Jorōgumo entangled the man while he slept. When the man awoke, he moved the web to a nearby tree. Moments later, he was shocked to see that the entangled tree was mercilessly ripped from the earth and dragged into the water. The working man spread news of the dangerous creature that dwelled by the waterfall, and the legend spread fast among the locals.

The myth goes on that a lumberjack visiting the site years later dropped his axe into the water, and fell in love with the Jorōgumo (disguised as a beautiful maiden) when it returned the axe to him. Falling in love with the spider-lady proved to be a fatal mistake, and after the lumberjack went missing shortly after, news of a murderous man-eating spider Yōkai grew fast.

Jorōgumo has since appeared in a number of tales from Japanese folklore, and is more often than not depicted as a deceitful creature that first tricks its victims by posing as a beautiful young lady. In some parts of Japan, it is even seen as a benevolent creature that helps people who are drowning in waterfalls.

What does Jorōgumo mean in Japanese?

Where is Jorōgumo from?

The Jōren falls are particularly noteworthy not only because of the association with the mythical spider-lady creature, but also because there is a large wasabi farm there that people travel to especially to taste the nationally-renowned fresh wasabi. They even make wasabi ice cream to showcase the taste to visitors.

The waterfall is also a hotspot for those wanting to experience a traditional Japanese fishing method, and many people go there to practice bamboo rod trout fishing.

How old is Jorōgumo?

Although no age is specifically given for that of a Jorōgumo, they are believed to be at least 400 years old. This is the age that the golden orb-weaver spider (the species that morphs into Jorōgumo) is said to gain magical shapeshifting powers.

Can Jorōgumo be male?

Jorōgumo is not a male mythical creature, nor can it be. But there are some Japanese yōkai that take the form of male spiders, such as Tsuchigumo, a giant spider-like monster with a ferocious disposition.

What do you know about Jorōgumo? Do you have a favourite Yōkai? If so, let us know in the comment section below!

To learn more about Jorōgumo, watch the great YouTube video below by Storied.