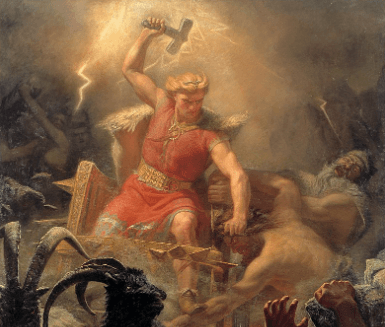 In Norse mythology, Thor is the son of the widely revered god Odin, and is a powerful hammer-wielding god renowned for his immense strength and the protection of humanity. He is the god of thunder and lightning.

It is quite common to hear the question “how did Thor lose his right eye?”. More often than not, this question stems from the events in the 2017 film Thor: Ragnarok. Here, we explore the relevance of this to Norse mythology in this article.

How Did Thor Lose His Eye?

Firstly, it is important to note that, according to known Norse mythology texts, there is no record or acknowledgement of Thor losing his eye. Thor’s father, Odin, however, is often depicted with one eye, and this is discussed later in the article.

In the film Thor: Ragnarok, Thor loses his eye during a battle with Hela after she slices his right eye with a ferocious swipe of her sword. This was seen as a symbolic reference as to make Thor resemble Odin and embody his power and wisdom.

How Did Odin Lose His Eye?

As mentioned above, Odin did in fact have only one eye in many depictions in Norse mythology. It is believed that Odin sacrificed one of his eyes to the spring of Mimisbrunnr in exchange for the wisdom that the spring gave him.

This self-sacrifice was not the only thing that Odin gave up in virtue of his quest for wisdom. In fact, Odin also sacrificed himself in a symbolic suicide that involved him jumping on his spear and subsequently hanging himself from the World Tree, Yggdrasil.

These actions gave Odin the wisdom he desired through several visions and the attainment of mystical knowledge. Odin hung from the Yggdrasil for 9 days and 9 nights and, when he returned, he had gained knowledge of the mystical runes at the heart of Norse cosmology. From thereon in, Odin was on a different plane of wisdom and was able to cure the sick, assign lust, temper storms, and subdue evil assailants.

How did Thor get his eye back?

After Thor loses his eye in the Marvel Cinematic Universe, he can later be seen wearing a cybernetic prosthetic eye in various movies, including Avengers: Infinity War and Endgame.

How he came to get it is the result of an exchange with the genetically enhanced Rocket Raccoon, who acquired the eye following a bet with “some jerk on Contraxia”. He subsequently gifted the prosthetic eye to Thor after learning of his quest to defeat Thanos.

We hope you enjoyed learning about how Thor lost his right eye, and how it related to Norse mythology.

If there is something else you’d like to read about in relation to film or pop culture and their relation to mythology, let us know in the comment section. For any other enquiries, contact me at basil@mythologyplanet.com