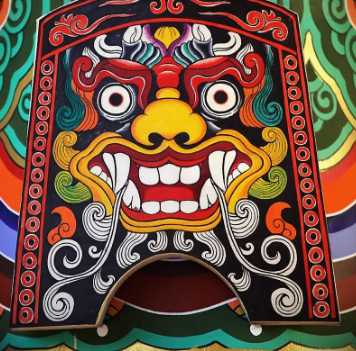 Korean pop culture has entered the mainstream on a global scale in recent years, but little is known about Korean mythology. Yet, Korean folklore is riddled with interesting creatures and stories, each with with its own appeal. Here, we ask – what are Dokkaebi? Read on for the story of Korean goblins.

In simple terms, Dokkaebi are nature spirits that manifest as goblin like creatures. In Korean folklore, they have the ability to interact with humans and often use their powers to trick them.

Dokkaebi are typically portrayed wearing a hanbok, a form of traditional Korean dress that is worn on formal occasions. It is usually colorful and decorated with simple lines.

The Origin of the Dokkaebi?

The first mention of the Korean goblins is found in a story from the Silla kingdom of central and southern Korea, featuring in the Lady Dohwa and Bachelor Bihyeong.

Since their first appearance in folklore, they have since been a regular feature in folk tales in Korean mythology, often interacting with human protagonists in various ways.

The Characteristics of the Dokkaebi

The Dokkaebi (Korean: 도깨비) are said to have a number if different skills, ranging from the ability to bestow good fortune to punishing humans for their sins.

They are commonly portrayed as being very ugly with red faces, and sometimes have horns and one or two legs. They are created from inanimate objects that have been stained with blood, often arising from mundane objects such as the broom.

More often than not, the Korean goblins are seen as evil or tricksters (such as the satyr in Greek mythology), but some stories depict positive experiences with the Dokkaebi.

Several rituals are performed that use the supernatural powers of the Dokkaebi. Oftentimes, they are involved in ceremonies to bring good harvests, ward off evil entities, and provide fortune. Other ceremonies are performed to drive away evil Dokkaebi that are believed to be the cause of bad luck, diseases, and fires.

The Dokkaebi come in many different forms, with the most common being the Cham, Gae, Gaksi, Oenun, and Oedari.

Depending on which part of the country you are in, you may also encounter different types of Korean goblins that vary in characteristics and traits.

We hope you enjoyed our article about the Korean Dokkaebi goblins. If you’d like to read more about Korean mythology, check back on our page on a weekly basis for new content. If there is something we missed, or if there’s a particular topic you’d like us to cover, let us know in the comment section below.  You may also like to read about Greek mythology, Egyptian mythology, and Norse mythology.