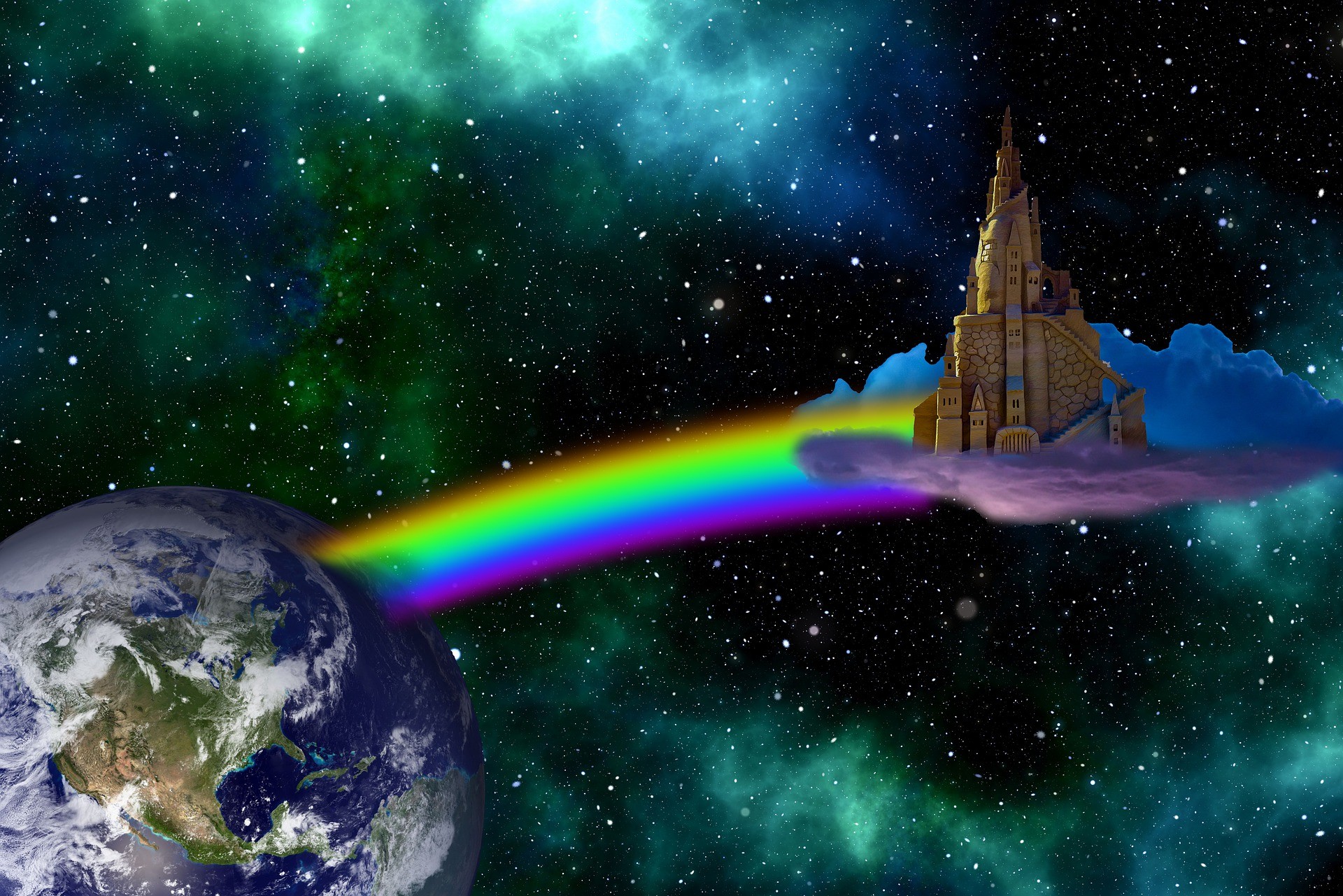 In Norse mythology there are said to be 9 different realms, sometimes known as the Nine Worlds. Niflheim and Muspelheim spawned from the empty void of Ginnungagap (think Chaos in Greek mythology), whereas the remaining 7 derive from Ymir’s body. They are Alfheim, Asgard, Helheim, Jotunheim, Midgard, Svartalfheim, and Vanaheim.

Niflheim is located in the northern part of Ginnungagap and is the home of Hvergelmir, an old spring that is protected by Nidhug the root-eating dragon. The freezing streams that flow from the spring are believed to be the source of the eleven rivers. It is said that some of the roots of Yggdrasil, the world tree, stretch into Niflheim to get water from Hvergelmir.

As one of the primordial realms of Ginnungagap, Niflheim represents the cold, whereas Muspehleim represents the fire. It is said that Odin threw Hel (Loki’s daughter) into Niflheim so she could preside over the nine realms. From here, Hel also watched over her subjects in the afterlife – i.e. those who died in unnoteworthy fashion.

As with Niflheim, Muspelheim (sometimes referred to as Muspell) is one of two primordial realms of Ginnungagap. Muspelheim, however, is located in the southern region of the gaping void, and is a burning place abound with fire.

Located within the depths of Muspelheim are fire giants and demons. The overlord of the fiery abyss is Surtr, a giant jötunn who carries a bright flaming sword.

Muspelheim Surtr are key figures in the events of Ragnarök, the apocalyptic event that led to the repopulation of the world by Líf and Lifthrasir.

Alfheim – “The Home of the Elves” (Old Norse: Álfheimr)

Alfheim is a realm inhabited by light elves that is fairly uncommon in known Norse texts and is rarely referred to. That being said, the elves were regarded as beautiful beings and it is likely that Alfheim was highly thought of in Norse civilizations of the past.

It is believed that Alfheim was given to Freyr by the gods as a teething present. Freyr is a Vanir associated with virility, good harvest, and peace, and is widely attested in Norse mythology.

Asgard is perhaps the most famous of all of the Nine Worlds. It is the home of the gods and is expressly highlighted in a number of important Old Norse texts and sagas.

The name translates into English as the stronghold/enclosure of Aesir, the principal gods in Norse religion. It is believed that Asgard was destroyed and fully rebuilt in the events of Ragnarok.

Within Asgard there are a number of different realms, including Bifröst (the connecting point of Asgard and Midgard) and Himinbjörg (the home of Heimdallr, the overseer deity of humanity and Midgard).  Perhaps the most famous of the sub realms of Asgard is Valhalla, the great golden hall ruled by Odin where brave warriors go in the afterlife. The half of the warriors who don;t make it to Valhalla end up in another Asgard sub realm, Folkvangr.

Helheim – “The House of Hel”

Helheim is presided over by the daughter of Loki, Hel. Here, she is responsible for overseeing all folk who were not honourable enough to enter either Valhalla or Folkvangr in Asgard.

In Old Norse literature, Helheim is depicted as a cold and miserable place that sucks the life out of all those who arrive there. Indeed, it is said that anybody who ends up in Helheim will never feel happiness again.

Helheim has an important role in the events of Ragnarök and the end of the world, as Hel utilised the dead that dwell within her realm to attack the Aesir in Vigrid.

Jotunheim – “The Home of the Giants” (Old Norse: Jötunheimr)

Jotunheim is where the giants of Norse mythology reside. They are the enemies of the gods of Asgard and play a big role in Ragnarok and the demise of the world.

Jotunheim is largely comprised of nature and rocky mountains and, in the absence of fertile land, the giants lived off the animals that dwelled within the realm. Jotunheim is separated from Asgard by the Iving river.

The main home of the giants is Utgard, a large fortified stronghold that stretches beyond sight and is ruled by Utgard-Loki.

Midgard is the home of the humans and is located in the centre of the world, hence the name. It is believed that the Rainbow Bridge connects the mortal realm to Asgard.

Surrounding Midgard is a large unsurpassable ocean that is guarded by the enormous Midgard Serpent. The serpent engulfs the entirety of Midgard in length due to its enormity.

It is believed that Odin and the other gods created the first two humans (Ash and Embla) from trees and sent them down to Midgard.

Svartalfheim – “The Home of the Dark Elves” (Old Norse: Svartálfaheimr)

In contrast to Alfheim, home of the light elves, Svartalfheim is home to the dark elves. Many scholars believe dark elves to be synonymous with dwarves.

The dark elves are highly skilled in crafting, and many Old Norse sagas tell of the gods receiving powerful equipment from them. One famous example is the mighty spear of Odin.

The king of Svartalfheim used to be the powerful sorcerer Hreidmar, until he died. The realm is sometimes referred to as Nidavellir (Old Norse: Niðavellir), which means “dark fields”.

Vanaheim – “The Home of the Vanir” (Old Norse: Vanaheimr)

The Vanir were the gods of health, fertility, and wisdom. They are one of the two groups of Norse deities, the other being the Aesir.

Notable examples of the Vanir include Njörðr (a divinity associated with the seas and wind), Freyr and Freyja (Njörðr’s children), and Kvasir.

What does Heim mean?

You may have noticed that a lot of the Norse mythology realm names end in the word heim (e.g. Niflheim, Helheim). Heim simply means home in German, Faroese, Icelandic, and Norwegian. It is a common suffix for Norweigan places.

What does Gard mean?

As with heim, gard is a common suffix for place names in norse culture (e.g. Asgard, Midgard). Gard means stronghold or enclosure in English –  for example, Asgard means the “enclosure of Aesir” in Old Norse.

We hope you enjoyed reading about the 9 realms in Norse mythology. If you liked reading this, check out some of the other articles on our mythology website. Here are some to get started on:

What are the Dokkaebi?

What are the Eleusinian Mysteries?