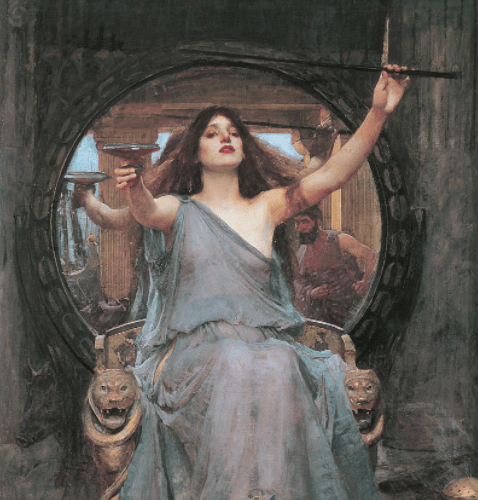 Circe is a minor goddess and very powerful enchantress in Greek mythology. She is the daughter of the sun god Helios and the ocean-nymph Perse.

Circe is present in many Greek legends, but perhaps her most widely-known appearance in Greek mythology is her encounter with Odysseus in Homer’s Odyssey. But how does Circe help Odysseus? Read on to find out more.

Who is Artemis’ twin?

What is a Manticore?

Does the Cult of Dionysus still exist?

The Myth of Odysseus and Circe

After the battle of Troy, Odysseus spent 10 years at sea on his way back home to the Kingdom of Ithaca. Odysseus wanted to return home to his family, but had to endure a number of hardships and challenging events to get there.

During the voyage, Odysseus encountered an idyllic island that was enticing in every way possible, and he and his crew decided to rest there after a series of ferocious storms had left them fatigued, both mentally and physically. At first they rested solely on the island’s shore, for fear of what they might encounter should they venture further inland.

When they ran out of resources, Odysseus travelled towards the centre of the island with a spear in hand. What Odysseus found was a grand, white marble palace. Odysseus returned to his crew on the shoreline and informed them of the palace that he saw.

Despite some hesitation, Odysseus and the crew decided to go to the palace, dividing the group into two to halve the danger. The first group, led by one of Odysseus’ second-in-command Eurylochus, travelled to the palace to ask for food. When they arrived at the palace, they were met with beautiful female singing voices. Enticed, the crew (with the exception of the ever-cautious Eurylochus) entered the palace main hall and were greeted with a fantastic feast.

Unfortunately, this idyllic welcome did not end well. The lead enchantress of the palace, Circe, used her sorcery to turn the crewman into pigs. Eurylochus raced back to Odysseus to inform him of what happened. With haste, Odysseus ventured to the palace on his lonesome to try and rescue his men.

On the way, he encountered Hermes the messenger of the gods, who warned him of the dangers of the enchantress Circe, and gave him a magical white flower (Moly) to repel some of Circe’s sorcery.

Circe met Odysseus at the entrance to the palace and offered him the same feast that she had offered his crewman. Odysseus followed her into the banquet room, with the Moly firmly in his hands at all times. Odysseus drank all the wine offered by Circe, and the sorceress was shocked when he did not transform into animal form.

After Odysseus threatened the enchantress with his sword, Circe conceded defeat and turned the crewman back into their human form.

How Does Circe Help Odysseus?

Despite a tumultuous start to their relationship. Circe eventually became an ally to Odysseus, so impressed she was with his kingly stature and the intelligence he displayed to dispel her sorcery.

Circe helps Odysseus by allowing him and his crewmen to stay at her palace until they truly were fully rested, and they had gotten over the turmoils of their previous adventures with the cannibalistic Laestrygonians and Polyphemus the cyclops.

Circe further helps Odysseus by advising him on the next steps of his journey, and Odysseus even returns to her island in the future for more guidance on how to get back home to Ithaca.

How Long Did Odysseus Stay With Circe?

So enamoured with the hospitality provided by Circe at her idyllic palace, Odysseus and his crew perhaps stayed there for too long. It is said that they remained at Circe’s palace for a full year, all the while enjoying bountiful feasts and luxurious living conditions.

Although Circe did not directly harm Odysseus, she did hurt his mission. That is, she distracted him from his ultimate goal of returning home to his family in Ithaca. In ancient Greece, the myth of Odysseus and Circe was often used as a lesson to not be blinded by greed or beauty, and to stay focussed on the task at hand.

It could also be said that Circe hurt Odysseus by harming his crewman. On their first encounter, Circe turned half of them into pigs, all but eliminating half of his ship’s crew in an instant.

Have you read Homer’s Odyssey? What is your take on how Circe helps Odysseus? Let us know in the comment section below!

To learn more about Circe, the Goddess of Sorcery, watch the great Youtube video below by Mythology & Fiction Explained.