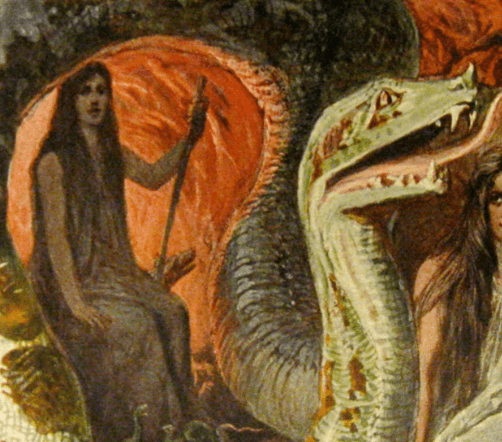 Angrboda is a regular feature in Norse myths, and she has an important role in the stories of some of the most well-known figures in the mythology.

But who exactly is Angrboda? Who is her family, where does she live, and why is she associated with grief? Read on to learn all about Angrboda.

Who were Odin’s Ravens?

Why does Thor only have one eye?

What are Norse Mythology’s Nine Worlds?

In Norse mythology, Angrboda (or Angrboða) is a giantess who is widely known as the bringer of grief. In fact, in Old Norse, the name Angrboda literally translates as “the one who brings grief”.

Although sparsely mentioned in Old Norse texts, Angrboda has two notable mentions, both of which depict her in slightly disparate ways.

In the Poetic Edda, a collection of Old Norse poems, Angrboda is only briefly mentioned in the Lay of Hyndla, where it is mentioned that she bore Loki’s wolf-child, Fenrir.

Angrboda also appears in Gylfaginning, a book in the 13th century Old Norse textbook, Prose Edda, written by Snorri Sturluson. In this book, the giantess is described as a witch living east of Midgard, and is not only referred to as the mother of Fenrir, but also as the mother of his siblings, Jörmungandr and Hel.

Who is the mother of Angrboda?

Angrboda’s parents are not mentioned in any known Old Norse writings. The only family that we know about are her consort, Loki, and her children, Jörmungandr, Hel, and Fenrir.

How does Angrboda die?

Just as information regarding the bringer of grief’s family is sparse, so is info relating to Angrboda’s death.

That being said, as a giantess from Jötunheimr, she most likely met her end during the events of Ragnarok, when the giants marched upon Asgard to fight the gods.

Her children played a crucial role in the events of Ragnarok, with perhaps most notable of them being the role played by Fenrir. It was Fenrir who fought an epic battle with Odin, and according to many accounts, first swallowed the sun, before swallowing Odin whole.

Did we miss something important about Angrboda? Who is your favourite figure in Norse mythology? Let us know in the comment section below?

To learn more about Angrboda, check out the great YouTube video below by 9 World Chronicles.