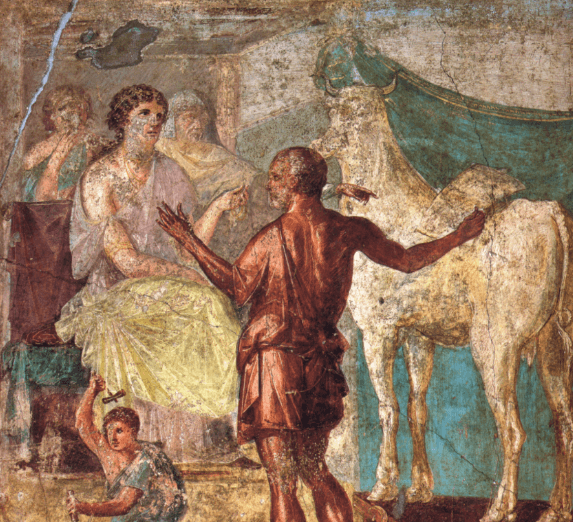 In Greek mythology, Pasiphae was the daughter of the personification of the Sun, Helios. Pasiphae was immortal, and as a queen of Crete, but she is perhaps best known for her relationship with a bull, and for being the mother of the mythical creature, the Minotuar.

Read on to learn about Pasiphae and the bull. Why did they mate? Who is Pasiphae related to? How did she die? All this and more.

Pasiphae was the goddess of witchcraft, and was a highly skilled practitioner in the field, too. Perhaps the most famous example of Pasiphae using her witchcraft skills in myth is when she poisoned the semen of her husband, King Minos of Crete, as a way of punishing him for his infidelity. The poisoned ejaculate of King Minos also harmed whoever he lay with unfaithfully.

Being the daughter of deities, Pasiphae herself immortal and had divine powers. Pasiphae was widely worshipped in mainland Greece, but she was held in particularly high regard in Sparta. Spartan leaders (ephors) would pray at the shrine of Pasiphae in Sparta in order to seek prophetic dreams and solutions to their problems.

Her siblings included Circe, Perses, and Aeeta. Her origins were in Colchis, and she married King Minos to become the queen of Crete.

Pasiphae’s offspring include Ariadne, Androgeus, Phaedra, and the Minotuar. It was from the relationship between Pasiphae and the bull that the latter of these came into existence. .

Why did Pasiphae fall in love with a bull?

Pasiphae fell in love with the Cretan Bull after Poseidon cursed her and made her lust for the animal. It is believed that the curse placed on Pasiphae was not a punishment for her actions, but rather because of the actions of her husband, King Minos.

Poseidon had given King Minos a white bull for sacrificial purposes. So impressed by the stature of the bull, though, Minos decided not to sacrifice it, instead keeping it alive for himself. Poseidon – who is widely known for his vengeful fury – was furious with King Minos and made Pasiphae fall in love with the bull as punishment. Pasiphae and the bull later mated, and the Minotaur was born.

The Minotaur was the son of Pasiphae and the bull. When the Minotaur was born, King Minos was so horrified by the half-man, half-bull creature that he locked Pasiphae’s son away in a Labyrinth that was created by the mythical Greek architect Daedalus.

With the help of Ariadne, the Greek hero Theseus later killed the Minotaur to end a yearly sacrifice of Athenians that King Minos demanded of the Athenians. As punishment for the murder of his son, Androgeus, Minos called for seven Athenian young men and seven Athenian maidens to be sent every seventh year to be feasted upon by the Minotaur.

It was just before the third sacrifice that Theseus vowed to kill the creature. Using a ball of thread given to him by Ariadne, Thesues was able to navigate the Cretan Labyrinth and slay the Minotaur.

Did you enjoy reading about Pasiphae and the bull? Do you have anything to add about Pasiphae’s story? If so, let us know in the comment section below! For any enquiries, contact me at basil@mythologyplanet.com

You can watch a video about Pasiphae and the bull in the video below by.