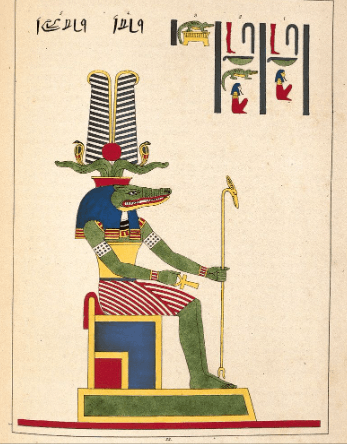 Recently, we wrote about the many Egyptian gods with animal heads, and why they were depicted in such a way. In this article, we will take a closer look at one of those gods – Sobek.

Read on to find out what Sobek is the god of, and why he takes the form that he does.

Sobek is a fluid god who represented many things in Egyptian mythology. Most commonly, he was associated with the protection of mankind from the dangers of the Nile.

Additionally, Sobek was often seen as the god of military prowess, fertility, and pharaonic power. It was believed that Sobek had apotropaic qualities that allowed him to divert danger away from humankind.

Evidence of the worship of Sobek dates as far back as the Old Kingdom of Egypt (2686 BC – 2181 BC) until the ancient Roman times (30 BC – 350 AD). This makes Sobek one of the longest standing gods in Egyptian pantheon.

Sobek is usually depicted wearing a feather-laden headdress with a sun disk, and typically holds an ankh to symbolize his ability to counter evil. He also has bull horns, black hair, and carries a staff.

What does Sobek represent?

Sobek’s personality was indicative of what he represented. He was a strong and powerful god, and he recognized strength in others, too. It was believed that many brave warriors were blessed by Sobek for demonstrating their might.

Sobek was always known for separating the wheat from the chaff, and would often hunt those who were deemed to be weak in a predatorial fashion.

What are Sobek’s powers?

Sobek was a force for god and one of the many gods that ancient Egyptians looked up to for guidance in times of hardship.

As mentioned already, his main power was to protect the Egyptians from the dangers of the Nile. He was also adept in water magic, and was said to be an expert in hydrokinesis – the complete control of water.

Sobek could also charm crocodiles in battle, a feat which would greatly aid his already formidable strength and staff-fighting skills.

Sobek was related to a number of other important and powerful gods and goddesses in Egyptian mythology. Knum and Neith were his parents, though he was raised by Osiris and Isis. Anubis was his half brother, Hathor was Sobek’s sister-in-law, and Horus was his foster brother.

I hope you enjoyed learning about what Sobek is the god of in Egyptian mythology. Which other Egyptian god would you like to know more about? Let us know in the comments below. For any other enquiries, contact me at basil@mythologyplanet.com