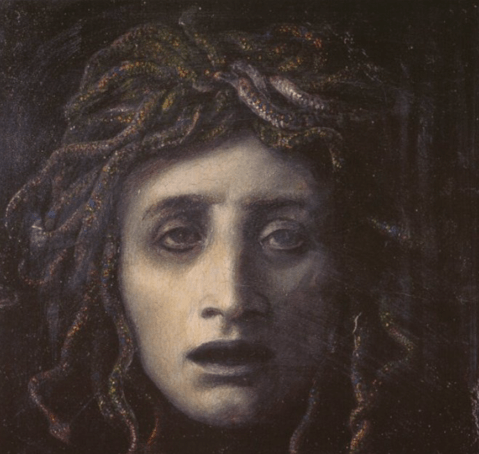 Greek mythology is home to some of the most horrific and terrifying beasts imaginable, and some of them stand out more than others.

A lot of the more famous beasts tend to have a masculine form – such as the Minoutar, Cerberus, or Typhon – but there are plenty of scary female mythical creatures, too.

Here, we’ve rounded up what we think are the scariest female monsters in Greek mythology. Let us know if you agree in the comment section below!

What are the Scariest Female Monsters in Greek Mythology?

It wouldn’t seem right to have a list of terrifying female creatures without including the “mother of all monsters”, Echidna.

Like her mate, Typhon, Echidna was a half-snake, half-human creature. She bore some of the most ferocious creatures in all of ancient Greek lore, including Cerberus, the Hydra, and the Chimera.

Echidna was believed to have lived in solitude in a cave away from her mate, Typhon. She would lure passers-by into traps there, and carry them back to her grotto where she would feast on them relentlessly.

Exactly where this cave was is the source of some debate, and it has been placed in various locations in Syria, Turkey, Italy, and Greece. One thing is for certain, though, and that is that Echidna is one of the most feared mythical creatures in ancient Greece.

Arachne spider-human hybrid creature who is easily one of the scariest female monsters in Greek mythology.

Arachne was once a highly skilled fabric spinner who spun the most incredible tapestries known to man. In fact, it is believed that people would travel from afar to see what Arachne was capable of making.

Unfortunately, though, this didn’t last long. With Arachne’s great skill came an even greater arrogance. She claimed that she was more highly skilled in weaving than any other being – both mortal and divine. This angered the gods greatly.

More specifically, this angered Athena immensely. Upon learning of Arachne’s defamation of the gods, Athena challenged the mortal Arachne to a weaving contest. Unfortunately for Arachne, she outperformed the goddess, and this would prove to be her downfall.

In a furious rage, Athena turned Arachne into a grotesque spider monster, and punished her for challenging the gods. In ancient Greece, this is how many people believed that the first spider came into existence.

From that moment on, Arachne became one of the most hideous mythical creatures in Greek mythology.

Medusa is one of three serpentine monsters known as the Gorgons, the other two being her sisters Stheno and Euryale. Medusa was born with incredible beauty, and people used to travel from around the world to glimpse at her.

The sea-god Poseidon was one of her many admirers, and he attempted to court her on numerous occasions, with Medusa rejecting him. This was partly because Medusa’s virginity was a requirement for her to remain a priestess at the Temple of Athena.

Poseidon grew tired of waiting, and took Medusa’s virginity by force. To make matters worse, he did it inside Athena’s temple, angering her greatly. Athena punished Medusa for the events that took place by turning her into a grotesque monster with a petrifying gaze and snakes for hair.

For many years, warriors tried to kill Medusa to take her grotesquely ugly head as a trophy. All of them failed, and were turned to stone by her stare. That was until Zeus’ son Perseus stepped up to the task.

Perseus killed Medusa using a reflective shield and other gifts that he had obtained from the gods, and for his reward he took Medusa’s head and used it as a weapon.

Scylla is a mythical sea monster who Odysseus encounters on his travels home after the Trojan War. Indeed, Scylla guarded the Strait of Messina on one side, and her counterpart Charybdis guarded it on the other.

The goddess enchantress, Circe, had warned Odysseus not to travel too close to the shore so that they could avoid Charybdis, but in doing so Odysseus and his men veered too far to the other side of the strait, where several sailors were captured and devoured by the monster.

Scylla is a terrifying creature, and was feared by sailors in ancient Greece. She was said to have a dragon-like form, and her bottom half was a long, scaly tail that allowed her to swim in the sea. Her upper half was made up of a woman’s body with multiple ugly heads and razor sharp teeth. She also had a number of dog heads that sprouted from her torso and howled in eerie tones.

In modern day, the saying “between Scylla and Charybdis” can be used interchangeably with “between a rock and a hard place”, where an individual finds themself among two similarly treacherous situations.

Lamia might be the least known monster on this list, but she is absolutely the most terrifying. Lamia was a child-eating monster who haunted the night and remained in a permanent state of wakefulness.

In appearance, Lamia was often depicted with a serpentine lower body and the upper body of a woman. She was also sometimes perceived as having no eyes, as Zeus gave her the ability to remove them so that she could gain reprieve from the pain of insomnia.

As with many myths involving female monsters, Lamia’s story is one that involves punishment for having an affair with a god. In this instance, the god was Zeus, and the notoriously vengeful Hera was dealing out the punishment.

Upon learning that Lamia, who was once the Queen of Libya, was having an affair with Zeus, Hera forced her to eat her own children and burdened her with perpetual insomnia.

It is believed that Lamia was used by parents in ancient times to scare children into good behaviour, much like the Bogeyman and the Qalupalik.

Do you agree with our list of the scariest female monsters in Greek mythology? If you think we’ve missed an obvious creature out, please let us know in the comment section below.

To see some more terrifying female monsters from other mythologies, check out the great YoUTube video below by Top 10 Archive.