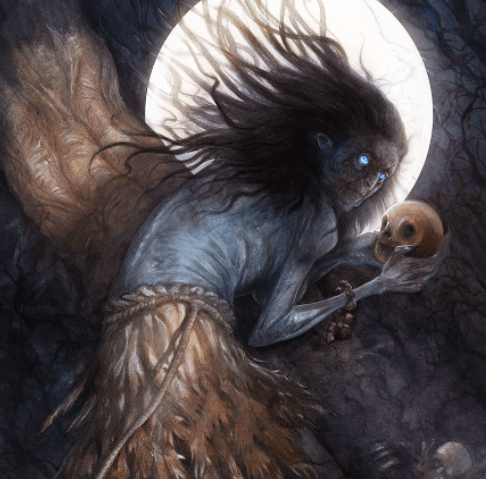 We recently wrote a bogeyman-esque mythical creature from Inuit mythology called the Qalupalik, but it is not the only monster that preys on misbehaving children. In English folklore, there is another bogeyman-like monster known as the Black Annis.

This witch-like creature is believed to have preyed upon children for hundreds of years, eating their flesh to sustain them.

What is the Black Annis?

The Black Annis, who is sometimes known as Black Agnes, is a witch-like demon with pale-blue skin, a grotesquely fierce appearance, and sharp claws that allow it to capture its prey.

The terrifying witch is said to live deep within a cave in Dane Hills, Leicestershire, and every so often she ventures out into the surrounding area to find some human flesh to feast on, preferably that of a child.

There is some uncertainty about the origins of the Black Annis, with some experts relating the witch to Danu in Celtic mythology, and others associating her with Hel in Norse mythology.

According to English historian Ronald Hutton, the legend of the Black Annis stems from a real person who went by the name of Agness Scott, hence why the witch is sometimes known as Black Agnes. Agnes Scott was a Dominican nun who looked after a community of lepers in Leicestershire, and lived in solitude within the Dane Hills caves. It is believed that, over time, the memory of the nun was distorted, and her legend morphed into that of Black Annis.

What does the Black Annis do?

Black Annis is a ferocious witch who hunts at night for children to capture and sheep to eat. She is said to hang the carcases of her prey outside the cave in which she lives in Leicestershire. You could often hear Black Annis before seeing her, and her haunting wails and screeches would echo from the hills throughout the area.

Locals in the area believe that Black Annis reached into their windows at night and would snatch children to bring them back to her lair. Indeed, parents would often use the tale of the witch to scare misbehaving children into obedience. It is also said that some houses in Leicestershire have small windows to deter Black Annis from their homes.

By all accounts, Black Annis is a grotesque witch-like creature with long, pointy facial features. She has menacing eyes, jet black straw-like hair, and sharp claws for catching her prey.

As she has lived in a cave for so long, her skin is a faded, pale blue, and her eyes have become nearly translucent. In fact, according to some reports, the witch only has one eye remaining.

One of her most striking creatures are the discoloured, razor sharp teeth that protrude from her mouth when she brandishes her evil grin.

One thing is for sure, Black Annis is not someone you’d want to bump into on a cold, dark evening in Leicestershire.

Where is Scraptoft Witches Cave?

Many locations have been proposed as the home of Black Annis. One of the most widely attributed is Scraptoft Witches Cave, where some people believe she still lives today.

The cave is located in a small forest in the outskirts of a small village in Leicestershire called Scraptoft. The village is roughly 5 miles east of Leicester city centre, and has a population of around 2,000 people.

Have you heard of Black Annis before? Maybe there are some similar witch-like creatures in folklore local to you? If so, let us know in the comment section below!

For more about Black Annis, check out the great YouTube video below by DukeOfAvalon.

2 thoughts on “What is the Black Annis in English Folklore?”