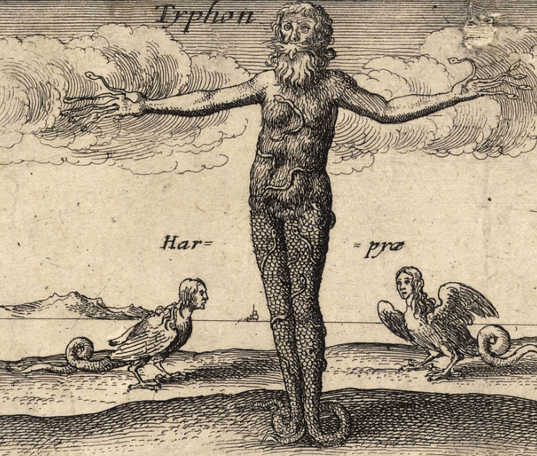 Typhon is known as one of the deadliest monsters in Greek mythology, and his malevolent nature made him a feared creature to the citizens of ancient Greece.

The giant serpentine beast is perhaps most widely known for his encounters with Zeus, and in this post we’re going to discover exactly how, why, and where Zeus trapped Typhon. Read on to learn all about it.

What were the goblin-like Kobaloi in Greek mythology?

Who blinded Polyphemus the cyclops?

Typhon (or Typhoeus) was a gigantic serpentine monster who is renowned as one of the fiercest creatures in ancient Greek times. Typhon is strongly associated with his mate, Echidna, a half-woman and half-snake hybrid. Typhon and Echidna were the parents of some of the most infamous Greek monsters (see below to learn about their family).

Typhon was, by all accounts, an incredibly powerful being who would use his might in terrible and lawless ways. Typhon was not only monstrous in nature, but also in appearance. It is said that from his shoulders sprouted hundreds of snake and dragon heads, each with flickering tongues. Fire encased these heads, too, and all kinds of unspeakable sounds were believed to have bellowed from them. Some descriptions of Typhon depict him as a winged humanoid with serpentine features, and nearly all representations of the creature show that he was capable of breathing fire.

Who are the parents of Typhon?

Typhon’s parentage varies depending on the source. The most commonly accepted theory is that Typhon was the son of the Titans Gaia and Tartarus. Gaia bore Typhon after the Titans were deposed from the heavens by the Olympians. Some, including mythographer Apollodorus, believe Gaia to have created the monstrous Typhon out of her anger at the gods for killing some of her offspring.

Other scholars suggest that Typhon was the son of Hera alone, or of Cronus.

Is Typhon a Titan or a God?

Typhon was neither one of the six elder Titans, nor one of the twelve Olympian gods who came to rule the world. Instead, Typhon can be seen as one of the many monsters that were related to either the Titans or the Olympians, such as the Cyclopes and the Hecatoncheires.

Perhaps the most famous story relating to Typhon is the battle that the monster had with Zeus, the king of the gods.

Zeus and Typhon warred after the serpentine creature challenged Zeus for the rule of the universe. This fight is known as the Typhonomachy, and is part of Hesoid’s ‘Succession Myth’. Indeed, it was in Hesiod’s Theogony that this battle was first mentioned.

After challenging Zeus, Typhon was thrown down to earth in an almighty blaze after being stricken by Zeus’ powerful thunderbolt.

Zeus then proceeded to burn all of Typhon’s snake heads, and sent the monster away as punishment.

Where did Zeus Trap Typhon?

Did Zeus trap Typhon? Well, after defeating Typhon, Zeus banished Typhon to the underworld, Tartarus. As punishment, he was ordered to remain there for all eternity.

Others believe that Zeus trapped Typhon under Mount Etna, where he remains as a prisoner of the gods to this day. This was first theorized by Apollodorus, who states that Zeus threw Mount Etna on top of Typhon as the serpent monster tried to escape to Sicily.

Typhon and Echidna are known as the father and mother of all monsters, respectively. Much of Greek mythology’s monstrous creatures are the offspring of the two serpentine figures. Among the most widely known are:

Do you think Typhon deserved to be trapped by Zeus? Who do you think is the most dangerous monster in Greek mythology? Let us know in the comment section below!

To learn more about Typhon, check out the great YouTube video below by Mythical Factory.