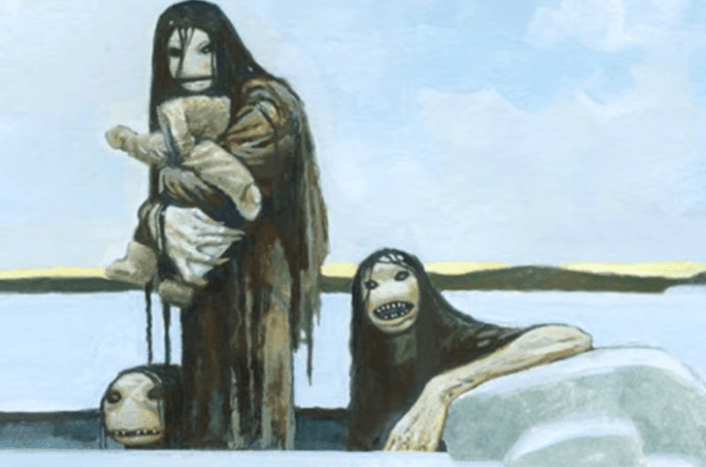 Inuit mythology is abrim with interesting tales and mysterious creatures, such as the Amarok Wolf and Mahaha the tickling demon. One noteworthy mythical creature in Inuit folklore is the Qallupilluit, which is often likened to the bogeyman.

But what exactly is the Qallupilluit? Read on to learn all about it.

The story of Leutogi the Polynesian bat goddess

The Qallupilluit, sometimes known as the Qalupalik, is a terrifying Inuit demoness that dwells in the Arctic waters and is believed to steal children. In Inuit mythology, they are believed to be incredibly ugly and smell strongly of sulphur.

In appearance, the Qallupilluit is like a scary mermaid, and has scaly and bumpy skin with a greenish-blue hue. The demoness also has long, straight hair as black as night, and webbed hands and feet that are elongated by pointy claws. The aquatic creatures also have fins coming out from the back of their heads and spine.

The Qallupilluit attracts children towards it by humming powerfully alluring melodies in their direction, and when they get close, the creature snatches children with it’s amauti and runs away with the child.

What they do with the captured children is the subject of some debate, but no proposed scenario is good. At worst, they eat the children to remain immortal with their nourishing youth. At best, they put them under a sleeping spell and hide them in icy caves for eternity.

Where is the Qallupilluit from?

The Qallupillut is a mythical creature prevalent in Inuit folklore, and it is believed to live in the frigid waters of the Arctic region.

More specifically, the Qallupilluit lives beneath waters with thin ice, and will use the shallowness to its advantage. It does this by knocking on the ice at the shallowest parts, luring children above ground to the noise and then capturing them when they cause the ice to break.

This is one way that Inuit parents would warn children away from thin ice – there was always a chance that the Qallupilluit would be there waiting for it to break.

Inuit mythology is full of intriguing and terrifying mythical creatures like the Qalulpalik. One of the most widely known is the Mahaha, a grotesque demon who is infamous for tickling people to death with its shockingly frozen touch.

The Mahaha has an eerie and malicious laugh, and derives sick pleasure from torturing its victims. It is said that those who fall at the hands of the Mahaha are often found frozen in the Arctic wilderness with a pained and frozen smile.

One thing is for sure, I would not want to bump into neither the Mahaha nor the Qallupilluit if I was lost in the frigid arctic regions. But, if you do find yourself in a northerly frozen expanse, make sure to keep your eyes peeled, and your ears pricked.

Have you heard of the Qallupilluit before? What’s your favourite story from Inuit mythology? Let us know in the comment section below!

To learn more about the Qallupilluit, watch the great YouTube video below by Legends & Folklore.