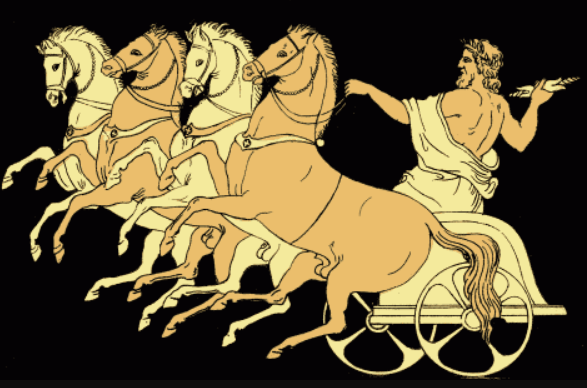 The ruler of all the gods, Zeus, was a powerful figure in ancient Greek times, and he is prominent in many of the myths and legends of the era.

We recently wrote about Zeus’ children, but here we want to cover another story surrounding the god of sky and lightning. Read on to learn about how Zeus defeated his father, and other facts related to the tale.

Who is Zeus’ father?

Zeus’ father was Kronos (or Cronus), a first generation Titan and the youngest son of the primordial deities Uranus and Gaia. Kronos himself overthrew his father (Uranus) in order to become the leader of the gods in the Golden Age of Greek mythology.

Uranus hated his children, as he was jealous of the love that Gaia afforded them. Because of this, he ruled with a heavy hand and imprisoned his children in the underworld, Tartarus. Kronos was the only one who was willing to challenge Uranus’ tyranny and, as such, he wielded a giant flint weapon given to him by Gaia and castrated his father.

Kronos’ consort, Rhea, who was also his sister, is the mother of Zeus. Rhea plays a big role in Zeus’ ascension to the ruler of all gods and leader of Mount Olympus.

Who were Zeus’ siblings?

According to Greek myth, Zeus had 6 siblings. One of these, Chiron, was his half-brother. The rest of his siblings were:

How did Zeus defeat his father?

It is commonly asked how Zeus killed his father, but this question is not really valid as it is widely suggested that Kronos is still living and confined to the underworld Tartarus. Zeus did, though, defeat his father and overthrow him to become the king of all gods.

Kronos was worried that history would repeat itself, and that his children would overthrow him as he did to his own father. As such, when Rhea bore him a child he swallowed them on the day they were born to stop them from ever becoming powerful enough to overthrow him.

Rhea grew tired of this, though, and when their youngest child (Zeus) was born, she devised a plan to trick Kronos. In order to do this, Rhea wrapped a stone in a blanket to resemble how her previous children looked after birth. After giving birth to Zeus, she gave the stone to Kronos for him to swallow in place of Zeus. Absentmindedly, he did so, and that was that, or so he thought.

In actual fact, Rhea had sent Zeus away to be raised by Amalthea, his goat-like foster mother, and he grew up on Mound Ida, Crete. It was here that he would devise his plot to overthrow Kronos.

Zeus utilised a poison given to him by Gaia that would force Kronos to expel the contents of his stomach and free Zeus’ siblings, the Hecatonkheires, and the Cyclopes. With the help of his freed allies, Zeus was equipped with everything he needed to defeat his father. This led to the ten-year Titanomachy, sometimes known as Battle of the Titans.

Zeus and the Olympians defeated the Titans and imprisoned them in Tartarus, where Hades would look over them and the Hekatonkheires would serve as guards.

Did you enjoy reading about how Zeus defeated Kronos? Let us know in the comment section below. If you think we missed something important, it’d be great to hear your input.