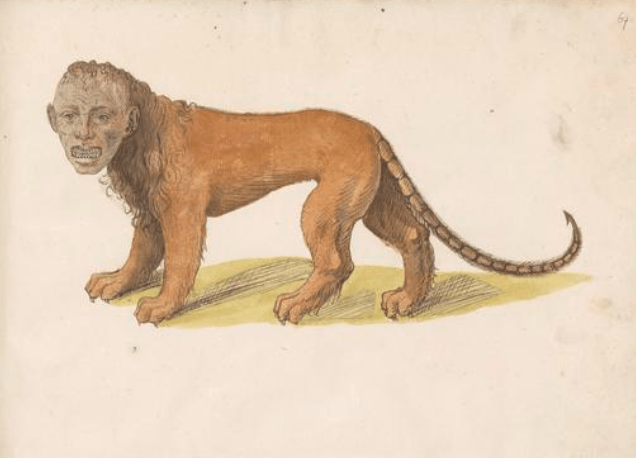 The manticore is a legendary creature from Persian and Greek mythology that is depicted as a mixture of many different animals, most commonly with the body of a lion and the head of a man. In this respect, it is often compared with the sphinx of Egyptian mythology.

Itsumade: The tale of a mythical Japanese bird

Everything to know about the Cult of Dionysus

Who is Sobek in Egyptian mythology?

What is a Manticore?

Originating in Persian mythology, the manticore is a half-beast, half-human creature that has a ferocious nature and is known for eating humans.

Most commonly, it is depicted with the head of a human, the body of a lion, and the tail of a scorpion. It also has large wings that allow it to fly and move around their prey quickly. In some depictions, the manticore also has porcupine-like spines that it is able to shoot from its tail to fell any of its enemies.

The manticore is compared to the sphinx and chimera of Egyptian and Greek mythology, respectively. It’s nature is perhaps more similar to that of the chimera, though, as they are both aggressive and dangerous creatures with a lust for blood. The sphinx, on the other hand, was more calculated and intelligent in its approach to its prey, and would kill only those who were unable to solve the sphinx’s riddles.

Due to its predatory prowess and incredible strength, the manticore was believed to be unconquerable. That being said, it is commonly said that the only animal able to evade a manticore’s attack is the elephant, although little information exists as to why this is the case.

The manticore is commonly confused with the mantyger, but they are in fact two separate mythical creatures.

The mantyger is has the body of a tiger and the head and hands of a man. It also has long tusks and horns that it uses to impale its victims. The myth of the mantyger originated in Medieval Europe and some think that it is a result of a second-hand description of baboons or a similar primate.

The manticore takes its name from the early Middle Persian, where it was known as mardykhowr (مردخوار). In English, this translates as “maneater” (mardya – man; khowr – to eat).

The manticore was given this name due to its predatory nature, and it was said to eat men whole with its large and ultra-sharp teeth.

The Greek word for manticore

What is a Manticore a mix of?

The manticore is said to have a man’s head, a lion’s body, and a scorpion’s tail. Additionally, it had large wings that enabled it to fly, and porcupine-like spines that it hurled at enemies to immobilise them.

Due to the far-reaching influence of the manticore throughout history, its depictions vary greatly depending on the culture or mythology in which it is found. For instance, it is sometimes depicted with a lion’s body and head, with large wings and scorpion tail. Generally, though, the manticore is made up of the aforementioned beings.

How do you kill a Manticore?

The manticore was seen as indestructible and it is extremely difficult to find ways to best it. All weapons were unable to penetrate its infallible fur and hide, and the only viable option was to kill the manticore whilst it was still an infant.

The better option was to learn how to evade the manticore. One of the main warning signs that a manticore attack is imminent is to listen for its sound. The manticore is not able to speak any human language, but in many tales it also doesn’t sound like a lion. Instead, when a manticore makes a noise it sounds similar to that of a trumpet.

There is a common story in Persian folklore that tells the tale of a small group of people who were able to successfully evade the manticore whilst roaming through the jungle. They did this by listening for music in the distance (the sound of the manticore), and heading in the opposite direction.

What do you think about the manticore? Can you think of a mythical beast that you might find more terrifying? Let us know in the comment section below!

To learn more about the manticore, check out the great YouTube video below by What We Know.