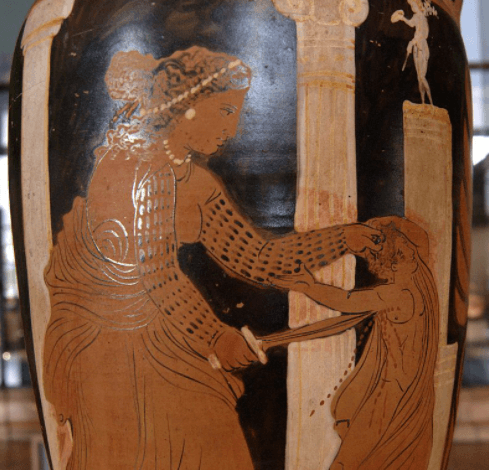 In Greek mythology, Medea is the grandchild of the sun god Helios and the daughter of King Aeëtes and Queen Idyia. She is perhaps best known as a key figure in the story of Jason and the Argonauts, in which she helps Jason in his quest to find the Golden Fleece.

One other notorious aspect of Medea’s story is how vengeful she was, which led to her killing her own children in various accounts of the myth. But exactly why did Medea kill her own children? Read on to find out more.

Who is the twin of Artemis?

Who are Stheno, Euryale, and Medusa?

Medea was the granddaughter of the sun god Helios. She is most widely known in Greek mythology as being a consort to Jason, and plays a prominent role in his story in Hesiod’s Theogony (c. 700 BC).

She was also a key figure in Euripides’ tragedy Medea, which chronicles her relationship with Jason, and the aftermath of their fallout after Jason leaves her to be with Glauce, a princess of Corinth.

The epic poem Argonautica, written by Apollonius Rhodius, also featured Medea heavily. In Book 4 of Argonautica, a chapter entitled The Love of Medea is dedicated to her complicated relationship with Jason.

Medea’s relationship with Jason has many different versions.

According to the aforementioned Argonautica, which is the most widely used version of events, Rhodius tells of how Medea fell deeply in love with the leader of the Argonauts, and promised to help him in his search for the Golden Fleece. This favour came at a price, though, Jason must take her hand in marriage if she aided him successfully.

This plan worked, and after Jason acquired the Golden Fleece from King Aeëtes, he fled Colchis with Medea, he enabled their escape by murdering her own brother to cause a distraction.

After several further adventures, including reinvigorating King Pelias and bewitching Talos of Crete, Jason and Medea fled to Corinth, where they were married for around 10 years and had up to 14 children, according to various accounts.

Why did Medea kill her children?

After spending circa 10 years in Corinth together, Jason betrayed Medea by leaving her for Princess Glauce (also known as Creusa), the daughter of King Creon of Corinth.

Medea was devastated, and plotted ways to exact her revenge on Jason and the princess. She first killed Glauce by sending her a poison-laden dress. King Creon of Corinth was also killed as collateral damage as he tried to rescue his daughter.

Yet, Medea wanted further revenge on Jason, and she exacted it in the worst way imaginable. According to the ancient Greek tragedian Euripides, Medea murdered two of her sons – Mermerus and Pheres – that she bore through Jason, and stopped him from giving them a proper burial afterwards. Medea then fled Corinth for Athens with the help of Helios, who provided her with a dragon-driven chariot. This latter fact may indicate that the gods did not completely disagree with Medea’s actions.

Did Medea really kill her children?

Some scholars contend that the Medea never did kill her two sons in cold blood, and that this was solely a later version of the story created by Euripides in the latter part of the 5th century BC.

Some scholars, including legendary Greek poet Creophylus, believe that Mermerus and Pheres were stoned to death by the citizens of Corinth, and that Medea was not responsible for the death of her two sons.

Eumelus of Corinth, a semi-legendary Greek epic poet, contended that Medea did kill her children, but that she did so by accident as she tried to immortalise them by burying them alive beneath the Temple of Hera.

Have you heard a different account of why did Medea kill her children? As with all myths and legends, various versions usually exist, and would love to hear from you if you know of a different story. Let us know in the comment section below.

To learn more about Jason and Medea, watch the great YouTube video below by Ted-Ed.