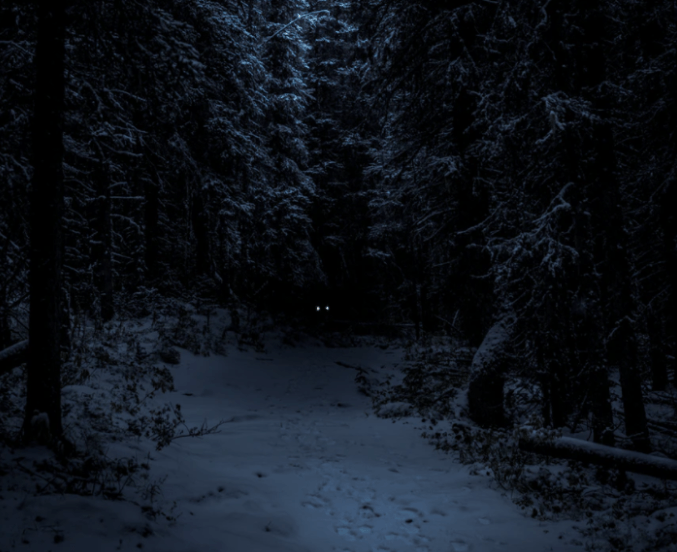 The Ijiraq, also known as the Ijiraat, are scary creatures in Inuit mythology that have the ability to change their shape and deceive people in order to do mischievous and nasty things.

But what exactly are they? What do they look like? And in which Inuit folktales do they appear? Read on to learn all about the Ijiraq.

What is the Mahaha in Inuit mythology?

What is the Amarok Wolf in Inuit mythology?

Who are Huginn and Muninn?

The Ijiraq are shape shifting creatures who kidnap children and abandon them in places that are hidden away and not easy to find. They have been said to take on many different animal forms including wolves, bears, reindeer, ravens, and sometimes humans.

It is said that no matter what form the ijiraq takes, it’s eyes are always the same, and one way of identifying them is to look out for their piercing, glowing red eyes. They are a frightening creature with a distinct appearance in human form. Their eyes and lips are said to be sideways, meaning that they blink and close their mouth vertically as opposed to horizontally. Perhaps equally as terrifying is their ability to steal memories from those who they terrorize, meaning that people who encounter the ijiraq may not remember where it took place, and may not remember a whole lot else, too.

The ijiraq mainly dwell in Arctic rainforests, and await travellers who pass by the woods on their lonesome before launching an attack. More often than not, they are said to target children. One thing is almost guaranteed, though. If you are targeted by the ijiraq, you stand little chance of escaping as they are expert hunters.

Where do the Ijiraq live?

The Ijiraq are believed to hunt the entire Arctic region, but Freeman’s Cove is particularly notable as a place where many sightings have taken place.

Many elders in North Baffin, Canada, also speak of ijiraq sightings. In fact, the word ijiraq comes from a North Baffin dialect, and literally translates as shapeshifter.

Most Inuit folktales tell of children and young hunters being captured. One such tale, though, tells of an encounter that an angakkuq (Inuit shaman) had with the ijiraq. Whilst travelling alone in a snowstorm one evening, the angakkuq became surrounded by the ijiraq, whose intimidating red-glowing stare sent shivers down his spine.

The shaman convinced them that he was no threat to them, but refused their offer when they asked him to join forces with them. This angered the ijiraq, who attacked the shaman and physically overbore him. The shaman fought back with the help of his friendly spirits, but it was futile, and soon he was left unconscious and was carried to the home of the ijiraq.

Whilst there, the ijiraq saw a better side of the creature, as one of the female ijiraq agreed to free him on the basis that she could see him again. The angakkuq returned home, but the memory-stealing powers of the ijiraq began to take effect, and he soon had little recollection of the whole event. The ijiraq haunted the shaman for the rest of his days and, when he was on his deathbed, he remembered vividly the experience he had. After they returned to revel in his mortal pain, he agreed to join the creatures instead of going to heaven. It is because of this that many believe the ijiraq to be the spirits of recently deceased folk.

What is an Inukshuk?

Inukshuk are large man made cairns that can be found throughout the Arctic region and are significant to the indigineous peoples of the polar region.

They are important to the tale of the ijiraq as many Inuit elders regale how valuable they are for guiding abandoned children back home after being kidnapped by the evil creature.

Inukshuk have many uses historically, and they are noteworthy as being markers for camps, navigation, and also as a place of worship.

Did you know about the Ijiraq? Perhaps you’ve heard other tales about them that you’d like to share? And what’s your favourite story in Inuit mythology? Let us know in the comment section below!

To learn more about the ijiraq, and a number of other snow monsters, check out the amazing YouTube video below by Origins Explained.