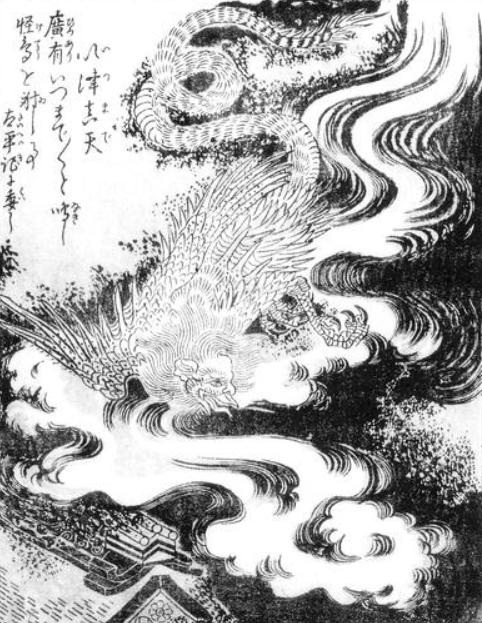 Japanese folklore is home to many eerie and mysterious creatures, none more so than the monstrous looking bird – Itsumade.

But what exactly is the itsumade? And where does the story come from? Read on to learn everything about the Japanese mythology bird.

What are Gwisin in Korean mythology?

What is the Oozlum Bird?

The itsumade is a large Japanese mythological bird that is believed to roam the night sky during troubled times screeching and crying out with unnerving sounds.

The itsumade has a peculiar form and is believed to have the face of a human, the body of a snake, and the beak and wings of a bird. It is a large creature with a wingspan of about 5 metres.

The Itsumade was first recorded in Japanese folklore in the Taiheiki, a famous Japanese 14th century epic that provides a fictional account of Japanese history from 1319 to 1367. A plague that ravaged the country in 1333 is mentioned as the catalyst for the creation of the Itsumade.

Itsumade appears to scream in a tormented voice as if to bring attention to its suffering. The reason for this is explained in the next section.

Itsumade takes its name from the very words it screeches when haunting the night sky, “itsumade? Itsumade?”. This translates from Japanese to English as “Until when? Until when?”.

The reason for this cry has been hypothesized in numerous ways. Some believe that the call is a cry for help in times of trouble. Itsumade calls out “Until when?” as if to ask greater beings how much longer the times of suffering will last and plague the lands in which they dwell.

Another theory is that the itsumade was previously a spirit of the dead that became an onryō (vengeful spirit) over time due to being ignored. It then took the form of a monstrous bird and called out from above to ask the people below how much longer their pain must go on unnoticed.

Many of the mythological beings of Japanese folklore, including Itsumade, fall under the category of the Yōkai. They are said to be the personification of unexplainable or supernatural events.

The Yōkai are a group of supernatural entities that vary greatly in character – from the extremely benevolent and honourable, to the downright evil.

The Yōkai are vast in number and there are too many to list here, but stay tuned for an in depth article on the Yōkai coming up soon.

The Yōkai come in all kinds of different forms, shapes, and sizes. Some take a human form, others are purely beast-like, and some come in the form of a hybrid half-animal half-beast creature.

The Yōkai are generally categorized into different groups. There are the shape-shifting Obake, the previously inanimate Tsukumogami, the haunting and vengeful Yurei, and the freakishly strong Kintaro. Many other groups of Yōkai exist, too, but there are too many to list.

Some of the most famous and prominent Yōkai are:

Did you enjoy reading about the itsumade? What’s your favourite Yōkai creature? Let us know in the comment section below. We’ll be writing more about Japanese mythology in the coming months, and would love to hear which creatures or myths you’d like to hear about.

To learn more about Itsumade and other Japanese creatures, check out the informative YouTube video below by Mythology Unleashed.

1 thought on “What is Itsumade – The Monstrous Japanese Bird”