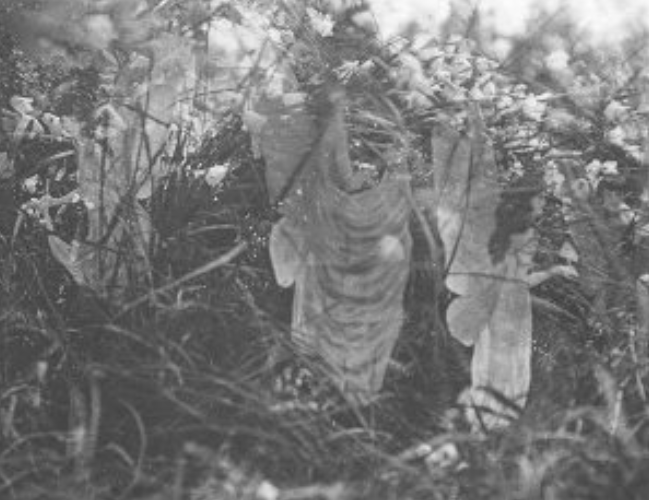 Everyone wants to believe that fairies are real, and for a short time in West Yorkshire, in a village called Cottingley, photographs seemed to suggest that two young cousins had photographed their existence in the early 1900s.

The Cottingley Fairies garnered wide public interest in the United Kingdom, and even instigated a response from the author of the stories of Sherlock Holmes, Sir Arthur Conan Doyle. Read on to learn all about these fairies.

Who is Mother Shipton? Yorkshire mythology

Is there an underwater town in Semerwater?

What is the Oozlum Bird?

What are the Cottingley Fairies?

The Cottingley Fairies hoax was a series of five photographs taken by two cousins (Elsie Wright and Frances Griffiths) in 1917 and 1920. The pictures appeared to be a real-life illustration of fairies, and many people came to believe that the pictures were authentic.

The two cousins used to play together at Cottingley Beck, West Yorkshire, and would tell their parents that they played with the fairies whilst there.

In order to prove this, they took Elsie’s father’s camera to the beck and returned with evidence – a picture of Frances with four dancing fairies in the foreground.

Elsie’s father didn’t believe them, but her mother did. A further image taken a month later of Elsie playing with a gnome further corroborated her belief. Elsie’s mother held on to her belief in the supernatural, and showed the images to Edward Gardner and Harold Snelling in 1919, the latter being the photographer who confirmed that the images were authentic works with no tampering.

After that, the images entered the public eye, and became a popular image among supernatural and spiritual enthusiasts in Britain.

At the behest of Sir Arthur Conan Doyle, Elsie and Frances took three more photographs in 1920 to “prove” that their experience with fairies was real.
The first of these, taken in August 1920, shows Frances in the woods with a fairy leaping before her face. The second photograph (pictured above) shows Elsie leaning towards a fairy, who is offering her a posy (small bunch of flowers). The final photograph taken in 1920 doesn’t feature either of the two cousins, but shows a group of fairies taking a sun bath in a cocoon-like feature in the middle of some grass.

After the photos began circulating British media in 1919, they came to the attention of Sir Arthur Conan Doyle, who was a huge believer in the supernatural. Doyle immediately took the photographs as proof that fairies and other supernatural entities are real.

In fact, it was Doyle who asked the two girls to produce three more pictures in 1920 to corroborate his belief and support an article that he was scheduled to write about fairies in the Christmas of 1920.

Were the Cottingley Fairy pictures real?

Well, as you can imagine, Cottingley Fairies photographs were indeed a hoax. In fact, skeptics began to find inconsistencies with the photographs as soon as they first became public.

For example, one of the fairies in the first picture does not have wings, and in the second photograph Elsie’s hand looks slightly elongated.

Yet, many still believed the photographs were evidence of the supernatural, and it wasn’t until 1978 that solid evidence began to debunk the pictures. In 1978, Canadian-American magician James Randi found a strong likeness between the fairies in the pictures and the fairies in a 1915 book Princess Mary’s Gift Book. He was, of course, correct in his assumption that the fairies were paper cutouts from the book, which was later confirmed by Elsie herself in 1981.

Although the Cottingley Fairies might be the most famous “discovery” of fairies in recent history, the sprite creature dates back as far as the 13th century, where descriptions of them can be found in texts from England by contemporary historian Gervase of Tilbury.

Since then, they have been found in numerous works of authors and artists throughout the Middle Ages.

Have you ever heard of the Cottingley Fairies? Or do you know of any other similar hoax stories in a place near you? If so, we’d love to hear about it in the comment section below.

If you want to see a recreation of how the Cottingley Fairy photographs were taken, check out the great YouTube video below by the National Science and Media Museum.