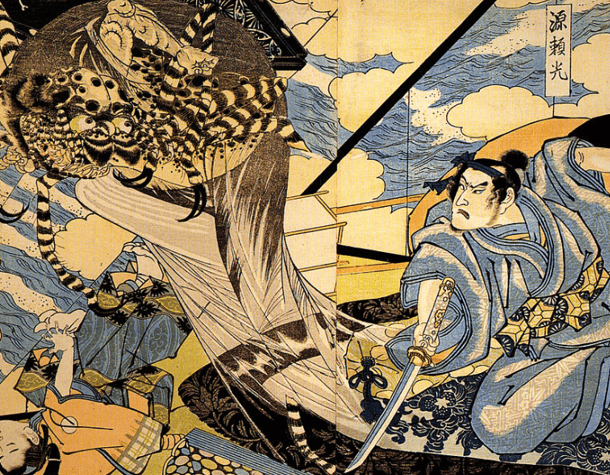 Tsuchigumo is part of a class of supernatural entities in Japanese mythology known as Yōkai. Tsuchigumo is a large spider-like creature and is one of the best known of the Yōkai in the whole of Japanese folklore.

But what exactly is Tsuchigumo? What are its origins? And where does it live? Read on to learn all about the mythical spider.

What is the Itsumade in Japanese mythology?

What are Dokkaebi? All about the Korean goblins

Tsuchigumo is a giant spider yōkai that began to be depicted as large mythical spider-like beasts in the Japanese middle ages. They are sometimes referred to as yatsukahagi or ōgumo. In Japanese, tsuchigumo translates literally as dirt or earth spider.

Tsuchigumo has been depicted in numerous fashions throughout history, but is commonly described as a beast with the limbs of a spider, the body of a tiger, and the face of a demon. More often than not, though, illustrations of tsuchigumo will just show the creature as a gigantic monstrous spider.

Tsuchigumo are not benevolent beasts, and many Japanese folktales tell of how the creature would hunt people while they were travelling home through the countryside and devour them.

Tsuchigumo are most likely to be found in caves, forest, and mountains, and their diet consists of humans and pretty much any animal they can get their hands on.

In Japanese folklore, tsuchigumo is strongly associated with another giant arachnid, Jorōgumo.

It is said that Jorōgumo is a mythical giant spider that can shapeshift into the form of a woman, and in many tales the creature also has the ability to breathe fire. In illustrations, Jorōgumo is typically depicted with the top half of the body as a beautiful woman, and the bottom half as a spider.

What is the most powerful Japanese Yōkai?

There is no definitive answer to the question of the most powerful Yōkai in Japanese mythology, but it has been widely debated.

Other contenders for the most powerful Yōkai include Shuten Doji, Tamamo No Mae, and Emperor Sutoku.

Have you already heard of the Yōkai tsuchigumo? Maybe you know of some other tales in Japanese folklore that speak of the giant spider creature. If so, let us know in the comment section below!

To learn about other weird and wonderful creatures in Japanese mythology, check out the great YouTube video below by Top 5 Scary Videos.