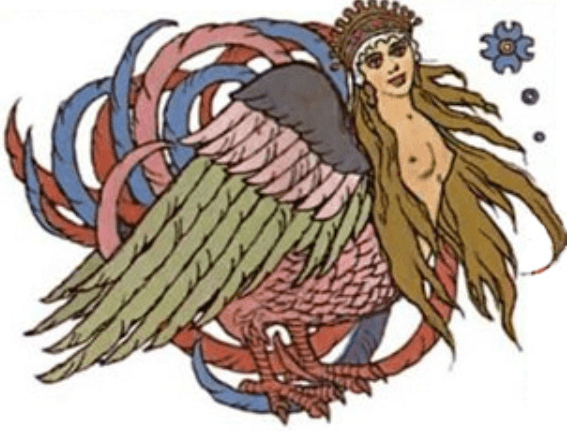 According to Slavic mythology, the Alkonost is a mythical creature with the body of the bird and the head of a woman. It is believed to be a beautiful creature who can entice people with its charming voice and appearance.

In this article we delve deeper into the mythical Slavic bird, discussing where the myth comes from and how it relates to other folk tales in Slavic mythology.

Who is the mythical giant bird Ziz?

What is the Oozlum bird in English folklore?

What is the Yokai itsumade?

The Alkonost is a legendary creature from Slavic mythology. The creature is said to be stunningly beautiful and takes the form of a half-bird, half-human. Its bottom half is an elegant eagle-like bird, while the top half is an alluring female with long, luscious locks and strikingly piercing eyes.

Perhaps the most famous thing about the Alkonost are the sounds it makes. Many Slavic folktales speak of the unforgettably powerful and seductive music that resonates from its mouth. In fact, it is said that when people hear these sounds, they are unable to feel happiness in the same way ever again.

This mythical woman-headed bird is said to live in the underworld with the Russian mythological creature, Sirin. When the Alkonost lays an egg, it nearly always coincides with devastating thunderstorms, and it is particularly dangerous for those who dwell at sea.

The Alkonost takes its name from Alycone, the daughter of Aeolus in Greek mythology. As a punishment from the gods, Alycone was transformed into a bird.

What is a Gamayun?

The Gamayun is a legendary mythical bird strongly associated with the Alkonost in Russain mythology. It is believed to be a very knowledgeable creature and is seen by many as the symbol of intelligence and wisdom.

Like the Alkonost, the Gamayun is also capable of enchanting and mesmerising humans. The prophetic woman-bird creature is believed to live in solitude on a remote island near the Euphrates River, in Western Asia.

Are there any other woman-headed bird creatures?

Have you heard of the Alkonost before? Or maybe you know of another woman-headed bird creature in a different mythology. If so, please let us know in the comment section below.

To learn about some other mythical creatures from Slavic folklore, watch the great YouTube video below by the Tale Foundry.