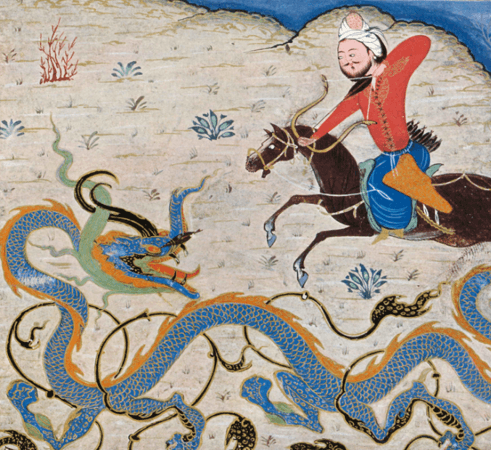 Persian mythology is rich with weird and wonderful creatures and monsters. Some of them, however, have a malevolent nature.

Here are 5 of the scariest creatures from Persian mythology.

What are the scariest creatures in Persian mythology?

The manticore is a ferocious creature whose name literally translates as “man eater”.

This mythical monster from Persian mythology is usually shown to have the body of a lion, the head of a human, and a scorpion’s tail. It is also often depicted to have wings, and fires sharp, spine-like projectiles at its enemies when challenged.

The manticore has a very aggressive nature with a strong lust for human flesh, and due to its size and strength, many have said that the beast is unable to be defeated in battle.

It is said that you are likely to hear the manticore before you see it, and its sound belies its appearance. While you might expect the creature to bellow a fierce leonine roar, the manticore instead sounds more like a trumpet, supposedly.

The Hadhayosh, also known as Sarsaok, is a large ox-like monster that comes from the Zoroastrian mythology of Persia. The Hadhayosh plays an important role in Persian mythology, as it is believed to have transported the very first humans across the cosmic ocean of Vourukasa.

According to Persian mythology, The Hadhayosh will also be integral during the Frashokereti (the end of all evil on earth). Fat from the ox monster will be used to make an life-reviving elixir that only works on righteous and virtuous folk. After the final renovation of the universe, those who drank the elixir will be brought back to life to live in unity with Ahura Mazda.

Where the Hadhayosh becomes scary is not in its reviving potential, but in its beastly appearance. Although it has various depictions (and some misleading representations in popular culture and video games), the Hadhayosh is said to be an enormous ox with multiple horns and a fiery mane. Their hide is exceptionally thick and they are believed to be nearly impossible to defeat in battle.

That is, the beast was immune to damage from everything except one sword – the Shamshir-e Zomorrodnegar. This blade was forged by Kaveh the Blacksmith and wielded by Prince Milad, legendary Persian hero from the epic poem Shahnameh.

After Prince Milad died, the demon Fulad-zereh guarded it fiercely, and anyone who wished to obtain it had to go throw the demon first. A wound from the sword was deadly not only to the demon, but for anyone who was struck by it, and they could only be healed using a potion made from Fulad-zereh’s brain.

The Azhdaha is a ginormous flying reptile monster that is typically depicted as a beastly snake or lizard with multiple heads, sharp claws, and huge wings.

It has a dragon-like resemblance and an extremely ferocious nature. With lust for blood, its large eyes glow a deep red when it hunts its prey. Those coveted by the Azhdaha have little chance of survival, too, as the monster is believed to be the size of a mountain, and has horns the size of trees that it uses to gore and trap its victims.

According to legend, the Azhdaha’s only vulnerability is the thin part of skin that covers its heart, and eating the Azhdaha’s heart is said to provide bountiful courage and bravery for any warrior who succeeds in defeating it.

The Al are demons of childbirth in Iranian folklore, and are not only some of the scariest creatures in Persian mythology, but one of the most feared demons in myths around the entire globe.

Known by various names (including alk, ol, hal, almasti and xal), the Al is believed to steal vital organs of pregnant women during childbirth, causing them to die in childbirth. They also have the ability to destroy unborn children in the womb.

According to the mythology in which they appear, the Al varies in appearance and can be either male or female. In Persian mythology, though, the monster is usually depicted as a thin and bony old woman with straw-like hair and hunched and sagging features. The witch-like demon also brandishes a hideously ugle smile and takes sadistic pleasure in the sorrow of others.

Who do you think is the scariest creature in Persian mythology? Did we miss one out of our list? Let us know in the comment section below!

To learn more about Persian myths, check out the great YouTube video below by Extra Credits.